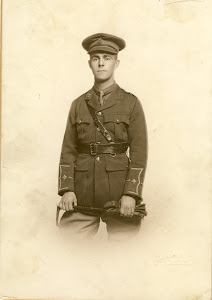 Bill Skilling, my mother-in-law, Norma Skilling Jackson's, adored older brother, was born August 20, 1889 in Teeswater, Ontario, the sixth child of John Skilling and Agnes Ruxton. In 1915 Bill graduated from Victoria College at the University of Toronto and, in spite of a rheumatic heart, enlisted in the Canadian Expeditionary Forces. He trained to become an officer at Oxford and joined the British Expeditionary Forces as a Second Lieutenant assigned to the Royal Field Artillery. He served as a Forward Observation Officer in France and Belgium. He endured many bloody battles but during the 3rd Battle of Ypres, around August 18, 1917, Bill collapsed and was invalided to England. After a period of rest he went to the Royal Artillery School in Athlone, Ireland as a Signalling Officer. In 1919 Bill returned to Europe as part of the British Army of the Rhine, 53rd Battalion, Royal Warwickshire Regiment.

Ruth Zaryski Jackson
Ruth has written stories and poems when younger, then academic papers or reports as a student, a researcher and later an Historical Planner. She started writing memoir when she realized she needed to tell her story, not only to her children, but also to her younger siblings whose childhoods differed greatly from hers. She has improved her craft taking on-line courses with U3A, Ryerson University and Days Road Writers. Allyson Latta's gentle support was instrumental in having her first story published in 2008 in "The Wisdom of Old Souls", an anthology about Grandmothers. In 2010 two of her poems were published in "Grandmothers' Necklace". Ruth's forthcoming memoir is called: "Missing Sadie, Missing Myself: Memories of a Childhood". ©Ruth Zaryski Jackson, Memoir Writer's World/memoirwritersworld.blogspot.com 2008-2019. Site and content wholly written, created, and owned by Ruth Zaryski Jackson and cannot be used without her express and written consent.